Speaking Lesson from Jessie Garcia: How to Read from a Script 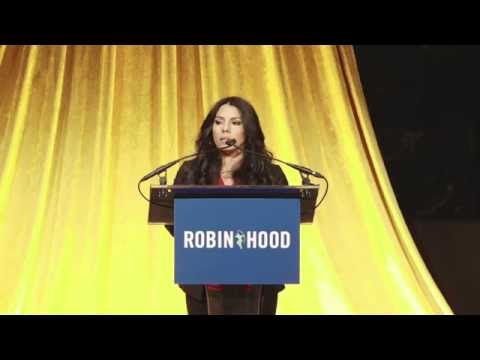 This fall, I had the pleasure of coaching Jessie Garcia, who was received a 2015  Robin Hood Foundation Hero’s Award.

Jessie, a caseworker for the Coalition for the Homeless, knows firsthand what it’s like to be homeless. She and her four children had to move to a shelter to escape her husband’s abuse.

At the Heroes Breakfast, Jessie reads her story directly from a script. Many speakers have difficulty with this. No matter how emotional and powerful your speech may be, reading from a script often sounds forced, artificial, and removed.

Jessie on the other hand speaks with full emotion. Her speech is deeply moving and sounds as though she is speaking directly to the audience – not reading from a script.

How does she do that?

Here are three strategies she uses:

1. Think as you speak. When we speak in conversation, we naturally think about our words right before we say them. This may only take an instant, but it is what separates talking from reading/reciting. Think about your words as you are saying them. Notice how Jessie takes a breath before speaking – giving herself a brief moment to think about her words right before she says them.

2. Change emotional tone. Divide your speech into several mini tones, each with a different emotional intent. Practice changing tones. The emotions of course should match the content. Notice how Jessie moves from despair to joy as she tells the story of her rise from homelessness.

3. Use silence. Notice how Jessie pauses purposefully – sometimes to let the audience digest her words – and sometimes even to cry. We have a tendency to want to fill up the room with noise. And yet a purposeful pause communicates more deeply than any words can ever do. Silence is what brings the audience close to you.

From the Green Room: Reading from a text can sound natural. This is difficult but not impossible.  How? Mean what you say as your are saying it.

“I used to feel crippling anxiety about speaking engagements. It took me months and countless hours to get ready. Sarah and I set a dream goal that one day I would be so comfortable speaking that I could give an excellent presentation with no angsting and much more efficient prep. Well, I just finished a Zoom session with over 100 IIT students in India – I was able to prepare much more quickly and with no agony. The students got a lot out of the presentation and I really enjoyed it! Working with Sarah has made a huge difference in my life in making me a better speaker and saving countless hours of work and angst. Sarah is a joy to collaborate with.”

Elena Botelho, Partner, GH Smart
We use cookies on our website to give you the most relevant experience by remembering your preferences and repeat visits. By clicking “Accept All”, you consent to the use of ALL the cookies. However, you may visit "Cookie Settings" to provide a controlled consent.
Cookie SettingsAccept All
Manage consent