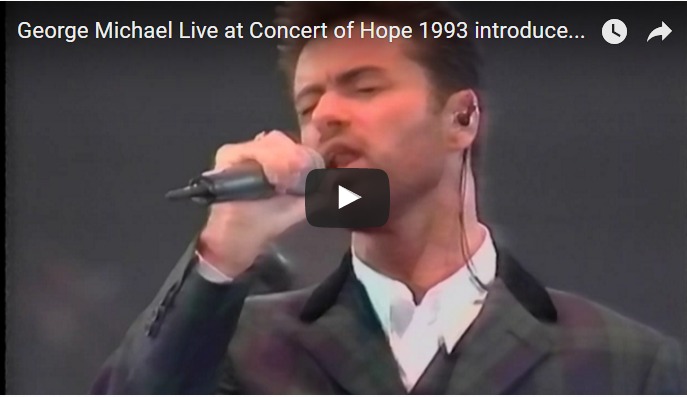 In Memoriam: Speaking Lessons from David Bowie and George Michael

We have much to learn from two of the artists who sadly passed away in 2016 – David Bowie and George Michael. Recently, I found a recording of a concert in which they both appear, one right after the other.

In the 1993 Concert of Hope for AIDS Charity at Wembley in London, David Bowie gives the introduction and George Michael is the first performer.

Bowie’s introduction is remarkable in its simplicity. Not a word is wasted. The introduction lasts but a minute, including several applauses. Within that one minute, Bowie manages to excite the audience, sober them to silence, and then raise their spirits once again.

Rather than focus on the artists who will be performing, Bowie addresses the audience directly – and speaks about why the concert matters to them. When he finishes, the audience is ready – even thirsty — to hear the concert.

When introducing a speaker, it is tempting to list their many accomplishments and accolades. It is more effective to speak simply and directly to the audience – to convey why the speaker they are about to hear is important for them. Don’t just give facts, give them meaning.

Likewise, among the many lessons we can learn from George Michael is the way he uses the pause. In minute 8:55, he pauses right before he ends the song Father Figure. It is this moment of silence that elicits the greatest applause from the audience.

As speakers, we tend to want to fill the room with noise. Silence, after all, can be a speaker’s worst nightmare. What if we truly have nothing to say? Yet the ability to use silence – to pause purposefully – can be a speaker’s greatest strength. Silence draws the audience closer. It is what brings them to the edge of their seats. Your moment of silence is what they will remember most.

From the Green Room: Keep your introductions simple and audience focused. Pause purposefully. Learn from the masters.

“My role as VP of Sales for a cyber security company requires that I deliver consequential presentations internally and externally. These include company kick offs, investor pitches, presentations to customers and partners. Sarah is not a cyber security expert, but seems to instantly get to the heart of what I want to say – it’s amazing. What I love most about her is how she’s able instantly work with what I bring her – often only an outline. The results: career defining presentations which have real impact on our business.”

Nathan Perdue, Director of Sales, Guardicore
We use cookies on our website to give you the most relevant experience by remembering your preferences and repeat visits. By clicking “Accept All”, you consent to the use of ALL the cookies. However, you may visit "Cookie Settings" to provide a controlled consent.
Cookie SettingsAccept All
Manage consent