How to End: Lesson from the Vault 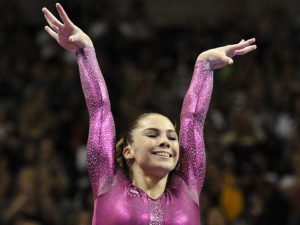 KAROLYI: …And finally, obviously, is the landing. So no movement, no additional motion, just a straight and solid landing.

CORNISH: And what’s interesting about this landing is that you’re taking a body that has been in full motion, right? I mean, you’ve really…

CORNISH: …built up so much speed coming down that essentially runway, launched yourself off of the table or the horse, as people still call it, and you’re supposed to come to almost a full stop. What do you have to do to your body to make that happen?

KAROLYI: You have to have a very, very perfectly developed sense of the landing motion and you just point it out as perfectly right. The body is in a huge speed and you have to reduce that to zero, that speed. This is not easy. This is probably the most difficult part. … a perfect landing would make a McKayla Maroney type of one.

From the Green Room: Endings are hard. You’re talking and talking – the energy is building – and it’s difficult to just stop. But as we know from watching the Olympics, a bad dismount can destroy a routine, while a good one makes all the difference.

Master your ending. Make it deliberate, strong, and final.

Sarah has offered communications training and coaching at every level of our firm – from entry level all the way to Partners. Over and over, the feedback has been outstanding – Sarah’s ability to help participants know how to answer the primary need of their audience is a unique perspective that garners great outcomes. This is not cookie-cutter public speaking training. Sarah has a deep understanding of our specific needs – and a highly sophisticated and personal approach to helping our leaders communicate with greater clarity and effectiveness.

Jess Harden, Learning and Development Manager, Brunswick Group
We use cookies on our website to give you the most relevant experience by remembering your preferences and repeat visits. By clicking “Accept All”, you consent to the use of ALL the cookies. However, you may visit "Cookie Settings" to provide a controlled consent.
Cookie SettingsAccept All
Manage consent