Convention Spotlight: How Did Paul Ryan Do? 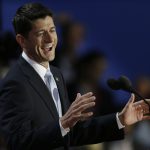 Ryan is the most skilled speaker at the GOP convention so far.

In addition to having a strong, magnetic presence – he actually delivered a memorable speech.

Take this moment, for example:

When (Obama) talked about change, many people liked the sound of it, especially in Janesville, where we were about to lose a major factory.

A lot of guys I went to high school with worked at that GM plant. Right there at that plant, candidate Obama said: “I believe that if our government is there to support you … this plant will be here for another hundred years.”  That’s what he said in 2008.

Well, as it turned out, that plant didn’t last another year.  It is locked up and empty to this day.  And that’s how it is in so many towns today, where the recovery that was promised is nowhere in sight.

When people think back to Ryan’s speech – even months later, they will remember this story. Why? Here are three reasons:

1. It’s concrete. It is a story about a factory in a Janesville in 2008. Right here – three concrete words that will stick in people’s minds.

2. It’s personal. Janesville is Ryan’s hometown – people will remember that.

3. It’s emotional.  People remember emotions much more than they do facts.

From the Green Room: People remember stories. Tell good ones. Make them concrete, personal, and always have an emotional intent.

Sarah is a superb coach. She sharpened my speaking skills considerably, covering everything from content and organization to how to connect with an audience and leave listeners with a clear take-home message. She doesn’t hesitate to offer tough love when needed, but her critiques are thoughtful and constructive. What’s more, her enthusiasm is contagious. I recommend her highly.

Senior Foundation Scholar, the Kauffman Foundation
We use cookies on our website to give you the most relevant experience by remembering your preferences and repeat visits. By clicking “Accept All”, you consent to the use of ALL the cookies. However, you may visit "Cookie Settings" to provide a controlled consent.
Cookie SettingsAccept All
Manage consent